Exceller’s Daughter Joins Him in the Rainbow Pasture 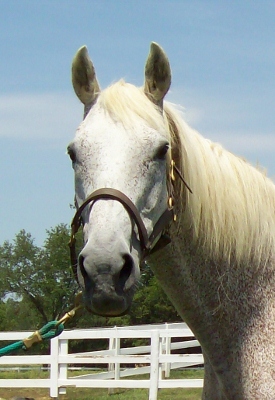 Dear Supporters of The Exceller Fund,

It
is with an extremely heavy heart that I write this.  Almata, the 30
year old daughter of Exceller, has been humanely euthanized due to
infirmities of old age.   I received a call on Christmas Day that she
didn’t seem like herself at breakfast, but finally did share a bit of
her friend’s grain.  Unfortunately, as time went on she got down and was having trouble getting up on her own.   Therefore, the incredibly difficult decision was made.

We
can all take comfort in the fact that we are part of an organization
that has been able to provide her and many others a dignified retirement.   Almata was not only well looked after, but she also received unconditional love and pampering from those that cared for her.  The last decade of her life was spent living as the queen we all know her to be; and that is what she left this world knowing.  She received endless pats, kisses and hugs.  Her food was cooked indoors so it was warm and
soft so she could eat it, she was given special soft hay, and don’t get
me started on the treats.  I know I did not dare visit without a fresh
bag of carrots.

I do want to thank all of you who were either directly involved with her, have been long time supporters or have become new partic 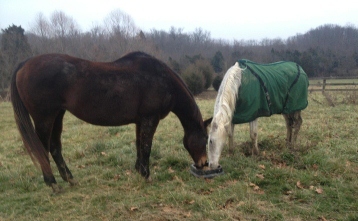 ipants with our program… It is because of YOU that this wonderful life has been made available to this incredibly special “Golden Years” mare.

I cannot tell you how grateful we are to both the new and previous owners of the farm where she and Franconia, Almata’s best friend, have spent the last several years of their lives.  It was truly a blessing that things worked out in a way that allowed the two mares to stay on the same
property when the farm was sold.  Almata has been a “Nervous Nellie”
from day one and moving her would have most definitely been too
difficult for her.  This way, she was able to determine when she was
ready to leave us on her own.  I cannot put into words how much I appreciate that.

Almata
will be deeply missed by many and I have no doubt there will be a lot
of tears shed over her passing in addition to my own.  Personally, it
gives me a sense of peace to envision her running off at a full gallop
with Exceller himself after crossing, no longer having a care in the
world.  After all, I have no doubt he was there waiting for her.