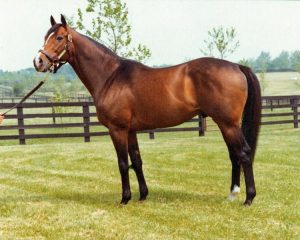 Exceller was foaled on May 12, 1973 in Kentucky. Bred by Mrs. Charles W. Engelhard, he was sold as a yearling for approximately $27,000 to Nelson Bunker Hunt. Hunts advisors figured that a son of European champion stayer Vaguely Noble with long and upright pasterns would be better suited to European racing and sent him to France.

Trained at first by Francois Mathet and later by Maurice Zilber, Exceller didn’t accomplish much at two, but blossomed as the distances got longer his three-year-old season. While stablemates Empery and Youth were taking down the French and English Derbys, Exceller pounded out wins in the grueling Prix de Royal Oak (run at 1 7/8 mile) and the Grand Prix de Paris. Shipped to England at 4, he wound up a half-length behind The Minstrel and Orange Bay in one of the most exciting King George VI and Queen Elizabeth Diamond Stakes ever run and annexed the Coronation Cup. Sent on to Woodbine, he won the Canadian International.

In the middle of 1977, Exceller was sent to California and placed in the care of Charlie Whittingham. Whittingham didn’t have high expectations for the horse, who walked stiffly on arrival and seemed worse for wear. A little time off and some of the Whittingham magic had Exceller running with and beating the best horses in America in short order.

As a five-year-old in 1978, Exceller had his best season on the racecourse, winning 7 of 10 starts, all in top company, on both dirt and turf. After claiming the Hollywood Gold Cup, Hollywood Invitational Turf Handicap, San Juan Capistrano, Sunset Handicap, Oak Tree Invitational, Exceller had his crowning moment. With Bill Shoemaker in the saddle, Exceller came from 22 lengths back to beat Seattle Slew and Affirmed in the Jockey Club Gold Cup. To be fair, Affirmed’s saddle had slipped, effectively taking him out of the race, and Slew had been hanging up almost suicidal fractions, but Exceller still powered through the Belmont mud to win by a nose.

He came back again at six and managed some nice placings, but was not quite the same horse. In sum, he had won 15 of 33 starts, including 13 stakes races, and placed in 11 more in France, England, Canada and the United States and had earned $1,654,003. He was the only horse in history to defeat two Triple Crown winners. Most racing writers agree that, along with Gallant Man, he may have been the best horse to race in America and not win a year-end championship.

Exceller ran best, like many European horses, “covered up”–deep in the pack early. In the late stages of the race he produced a powerful burst of speed and caught the leaders in the stretch. Exceller’s final quarter mile times are nothing short of amazing: he regularly sprinted the final quarter in under 25 seconds. His fractions of 23 2/5 seconds at the end of the Hollywood Gold Cup and Oak Tree Invitational is amazing when you consider that 23 seconds is a smoking *first* quarter in such a race. Exceller was syndicated and retired to stud at Gainesway Farm in Lexington Kentucky for the 1980 breeding season. He shared a small stallion barn with his sire Vaguely Noble and classic-winning champion stablemate Youth. In 1986 (and probably before), he stood for a $50,000 stud fee, the second-highest listed fee at Gainesway. To put this in perspective, champions Bates Motel and Temperence Hill also stood for $50,000, future top sire Mt. Livermore stood for $20,000, Youth stood for $12,500 and current top-10 sire Cozzene stood for an amazing $7,500!

As time went on, however, it became obvious that Exceller was never going to be a leading sire. By 1991, his stud fee had plummeted to $2,500. Out of the 32 stallions at Gainesway that year whose fees were listed, only the aging Cannonade had a lower fee.

In 1991, the syndicate was bought out by a breeder from Sweden and Exceller was shipped back across the Atlantic. The rest of the story is told by the Daily Racing Form.

Exceller left behind 16 crops of foals, including 19 stakes winners and 40 stakes horses, none of them of his quality. His runners were headed by Slew’s Exceller and Squan Song. The Thoroughbred Times lists 5 of his sons standing the 2001 breeding season: Champion Pilot (in Australia), Exattic (in New Zealand), Expedition Moon (in Kansas), Magliore (in Illinois) and Verification (in West Virginia). Exceller is also the broodmare sire of the young stallion Cat’s Career (out of Comical Cat) and the speedy mare Reciclada(Chi) (out of Exing), among many others.

Exceller was elected to the National Racing Hall of Fame in 1999. The plaque in the museum makes no mention of the manner of his death, only that he died in 1997.

This fund and many of the other thoroughbred rescue groups are ample evidence of the lives he touched. All of the horses saved by these groups are his legacy, as much as his sons and daughters, grandsons and granddaughters are.