A Home for the Holidays!

Racing Warrior, Raw Roy, gets his very own person for the holidays! 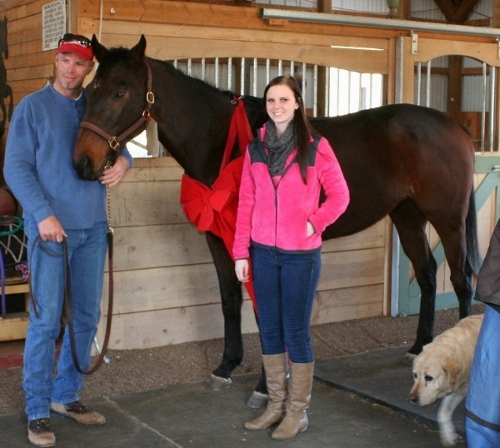 This
holiday proved that wishes really do come true, for both people and
horses.  Jeff Haney had always wanted to give his fourteen year old
daughter what she wanted most, a horse of her very own.

As luck would have it, Raw Roy, a Racing Warrior with 98 starts,
began training with Susan Vail at Firey Ranch several months ago.
Ranch owner, Margaret Firey, and Susan determined that Roy would be a
good fit for Jeff’s daughter, Tabitha, and gave Jeff glowing reviews of
the horse that has been dubbed the “The Fonze”.

“Susan
just dotes on him and tells me how cool he is; always referring to him
as ‘The Fonze’”, says The Exceller Fund volunteer, Leslie Hubbell.  “No
matter what she asks him to do, he’s more than willing, including being
‘cool’ out on the trail for the first time.” 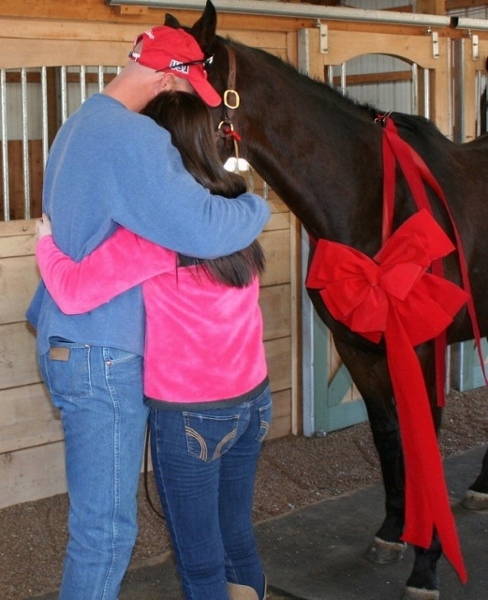 The
Exceller Fund worked with Jeff to finalize the details of this
arrangement prior to the holiday to make sure everything was in place so
he could present Raw Roy to his daughter with a bright red ribbon
around his neck.

“This was just as much as a gift for
Roy as it was for Tabitha”, said Nicole Smith, volunteer Executive
Director for The Exceller Fund, “and we are thrilled to be a part of
it.  Roy is a very special horse and we could not be happier to see him
placed with a young girl that will spoil him with the love and attention
that he deserves”. 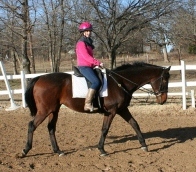 nd
Tabitha will remain at Firey Ranch under the direction of Susan as they
progress together.  May they share many more happy holidays together!